In 2016 our European portfolio performed remarkably well. After the 55% rise in 2015, it increased 26% in value in 2016, bringing the FY alpha to a wonderful 27.2. Performance was also very good at an individual stock level with very few negative surprises. The STOXX600 ended the year with a small loss of -1.2%. 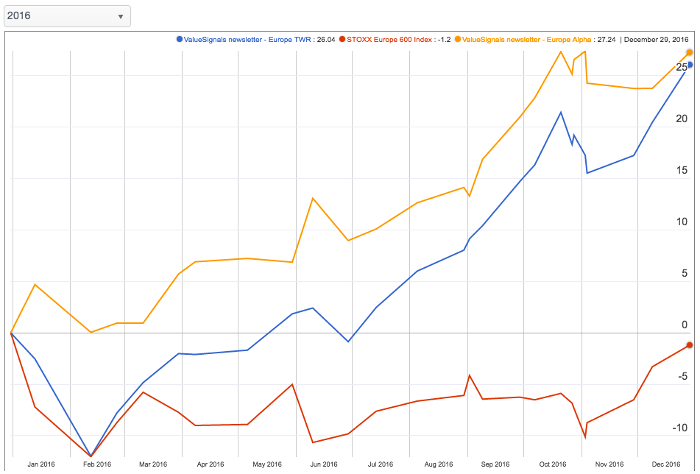 In our European portfolio we held 37 positions in total of which 26 went up and 11 lost value. All these positions are displayed in the scatter chart below. On the x-axis, you can see the invested amount at the start of the year (or at the date we bought the shares if the stock was added in 2016). The y-axis displays the % profit in 2016. 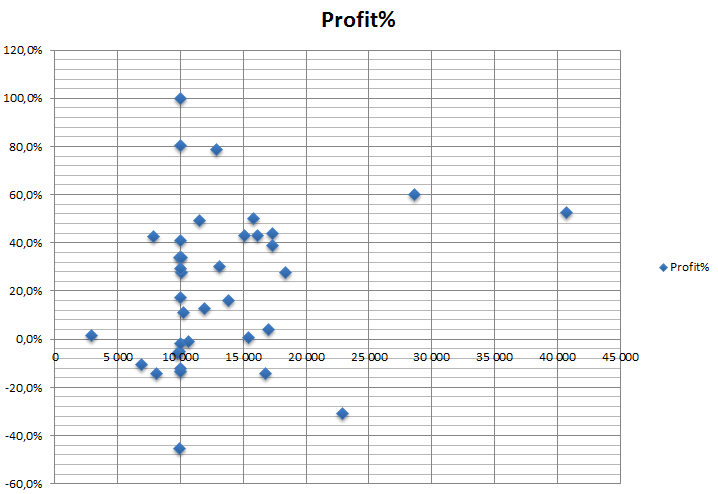 We added 12 positions in 2016 and these had an average proﬁt of 27.3%. You can clearly see these positions on the chart above as we always make a 10000 Euro investment in every new idea. 8 positions increased in value and 7 of these increased more than 20%. 4 positions showed losses but there were no losses in excess of -20%.

MGI Coutier and Corticeira Amorim made the largest contributions but more recent additions like Devoteam and BigBen Interactive also chipped in signiﬁcantly.

The clear winner in terms of % increase was BigBen Interactive which doubled in value. Close second was Coats Group, which increased 80% in only a few months time despite the negative predictions following the Brexit vote.

2 positions lost more than 20%. Real Good Food lost almost 45,5% due to disappointing results and a falling GBP. Agfa-Gevaert lost 30.7% but don’t forget that this stock was the clear winner in 2015 and added 154% during that year.

Join today and discover our January pick, an Italian company that helps to keep your car on the road and makes it run more efﬁciently.

Monthly newsletter subscriptions are still available for only €14.9/month. Subscribe to the screener and get the newsletter for only €10/month or €100/year extra!