The problem with single-factor valuation ratios is that they move “in and out of favor” and can significantly underperform the overall market over any given 10-year period despite their long-term outperformance.

The use of a “value composite” to measure undervaluation rather than using the single valuation ratio of, for example, price-to-sales or book to market.

O’Shaughnessy found that stocks selected based on the value composite outperformed stocks scoring highest on any single value factor 82% of the time in all 10-year rolling periods between 1964 and 2009. So, a composite that combines several different value factors delivers stronger returns and more consistency than any individual factor !

The VC1 factor or the value composite one is calculated using the following five valuation ratios:

How is VC1 calculated?

To calculate the VC1 factor, we assign a percentile ranking (1 to 100) to each of the five valuation ratios for each company.

For example, if a company has a price to sales ratio that is in the lowest 1 percent for our database, it receives a rank of 1 (lower is more undervalued), and if a stock has a PE ratio in the highest 1 percent (it is overvalued) of the universe, it receives a rank of 100. If a value is missing, we assign a neutral value of 50 for the valuation ratio.

Once all the valuation ratios have been ranked, we add up all the values for each company and (using this value) rank all the companies in percentiles (from 1 to 100).

Companies that are the most undervalued get a VC1 score of 1. Those with the worst (most expensive) score get a score of 100.

As with all the strategies in the screener, we have backtested the returns you could have made if you used the VC1 indicator as an investment strategy for the 12 years between June 2001 and June 2012.

Over this period, if you bought only non-financial companies (in Europe, the UK, Switzerland, and the Nordic countries) with the VC1 value of less than 20, you would have earned a respectable 12.36% per year or 283% in total.

This compares very favorably to the 4,86% per year or 73% of all the companies we tested returned over the same period.

We also tested what would have happened if you only bought companies with a VC1 value of more than 80 (in other words, overvalued companies). 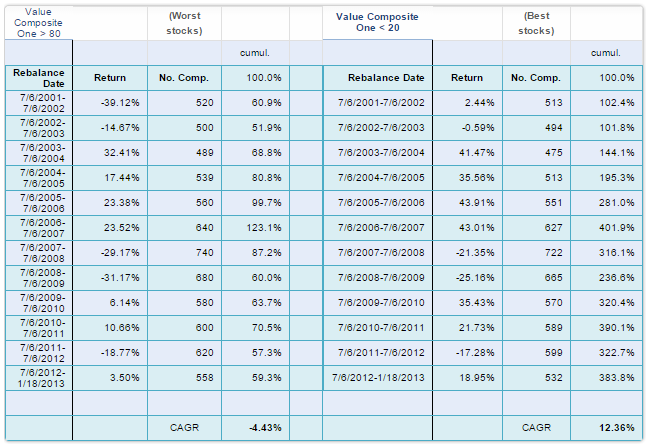 If you combine the VC1 with another factor like the top 20% of companies in terms of the 6 month Price Index, F-score, or shareholder Yield, not only will the number of companies be less, but your returns are also very likely to be higher as you saw with the research paper we sent you in 2012.