This inverted Earnings Yield will improve your models

One of the most popular ratios in our screener has to be the Earnings Yield ratio. (EBIT/EV) It is one of the two ratios that make up the Greenblatt Magic Formula, and many of our members have incorporated it into their own favorite screens. We also use it in the model that selects stocks for our European newsletter portfolio. While this ratio has helped us pick a significant number of high earners, one of our members (bsinvest) pointed out a few important flaws with it. This article is based on the email conversations and the bright and clear explanation provided by bsinvest. (Many thanks!)

The main problems with Earnings Yield and other related ratios are the following:

The same flaws exists for other ratios such as EBITDA/EV and FCF/EV. We added 3 new ratios to the screener to address these issues: EV/EBIT, EV/EBITDA and EV/FCF. These calculations invert the original versions and only calculate a value when the EBIT, EBITDA or FCF are larger than 0. They allow for a linear comparison model and keep negative EV companies at the top of the list.

Let’s have a closer look at both issues in more detail:

The screenshot below shows a screen of companies listed on the US-based stock exchanges excluding OTC and pink sheets. The screen has a few filters on market cap, minimum trading value, results age and industry. It then selects the top 20% of companies with the highest stock price increase during the last 3 months and sorts the results on Earnings Yield. This is the list that comes up:

Let’s use our new EV/EBIT ratio and sort this in the opposite direction. To remove stocks for which this ratio is missing we add a column filter. Here’s the list of companies that comes up:

As you can see, an additional company popped up at the top of the list: Gulf Resources Inc. This chemical producer did not appear in the first list, and the reason for that is that its EV is $-49m. By navigating to the scorecard and then to the dynamic glossary, we can see the numbers behind the EV. The company has a market cap of only 94.79m and almost no debts, but it has $146.2m in cash or short-term investments.

A company with this amount of cash compared to its market cap and debt does not belong at the bottom of the list. By using EV/EBIT, this type of company doesn’t disappear as soon as EV becomes negative.

As a company’s cash position improves and EV gets closer to 0, a small increase in EV will have a much bigger effect on the Earnings Yield than a similar increase in EBIT. The following example explains this issue. Let’s assume a company with the following data:

In the above example, when EBIT doubles, EBIT/EV will double as well. Intuitively, this seems reasonable and helps us compare companies based on their relative EY.

But let’s see what happens when to the ratio when we plot a chart with EV based on a cash position ranging from 0 to 200: 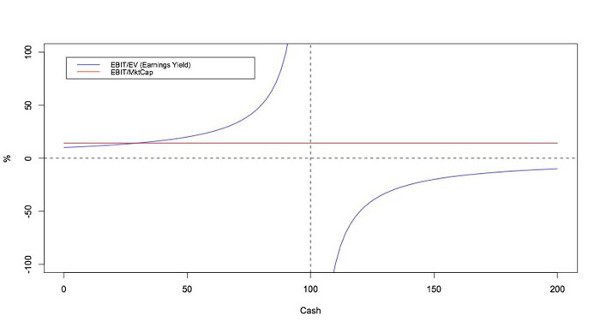 As you can see in the chart above, for a certain range of input parameters, a small change in cash will have a huge (non-linear) effect on the EY. If EBIT/EV were a model for a physical phenomenon in the natural sciences, we would say that the problem was ill-posed due to the discontinuity in the solution (see Well-posed problem).

Let’s have a closer look at a few values on this chart. The following table shows the corresponding EY for different cash positions:

As you can see, minimal changes in cash position have a massive impact on EY.

Another way of looking at this issue is the following question: given a choice, would you prefer a company with cash = 99 and EBIT = 10, or a company with cash = 90 and EBIT = 100? Obviously, you would prefer a ten times higher operating income if the cash position only was reduced by roughly 10%. Still, they both give the same EY (1000%), which illustrates the problem.

Inverting the ratio changes all of this. The chart below shows the same simulation as the example above, but for EV/EBIT.

The ratio EV/EBIT now varies linearly for all values of EV. It also works well in the range of EBIT that interests us (high EBIT). The only problem now is EBIT approaching zero, which will cause the ratio EV/EBIT to skyrocket. But that will make the company look very undesirable, which is also if EBIT approaches zero, so there is no big problem.

The EV/ EBIT, EV/EBITDA, and EV/FCF ratios create a linear model which is much more suited for ranking stocks. We will keep the original ratios in place since we want to keep our models true to the original design, but we encourage all members to try out these new versions instead.