Companies that are caught manipulating their earnings tend to see their stocks plummet in value. Is there a way to detect earnings manipulation only by looking at the financial statements?

Professor Messoud D. Beneish studied the characteristics of earnings manipulators and used this to create a model that is pretty good at detecting this type of companies. In his most recent paper, he demonstrates that the model correctly identified a large majority (71%) of the most famous accounting fraud cases that surfaced after the model's estimation period in advance of public disclosure. The model attained widespread recognition after a group of MBA students posted the earliest warning about Enron's accounting manipulation using the Beneish model a full year before the first analyst reports.

While very few companies get indicted for accounting fraud, the M-score helps predict a firm's prospects.

A typical earnings manipulator as defined by Beneish is a firm that is:
These companies are hazardous to invest in as they're very likely to be overpriced (because of their high recent growth trajectory) and they exhibit several problematic characteristics (either lower earnings quality or more challenging economic conditions). These companies are more likely to disappoint investors in the future.

To the extent that the pricing implications of these accounting-based indicators are not fully transparent to investors, firms that “look like” past earnings manipulators will also earn lower future returns.

Beneish initially described his M-score as a detector for companies that manipulate earnings. (click here to read his original paper.). In his more recent work, he reveals that the M-score is also an excellent predictor of future stock returns.

He summarized his main findings as follows:

How do you calculate the M-score?

The M-score is based on eight variables, of which some are designed to capture the effects of manipulation while others show preconditions that may prompt firms to engage in such activity. While Beneish takes data from the fiscal years, we use the last trailing twelve-month (TTM) numbers as the current year (year t). For year t-1, we take the TTM results for the 12 months before year t.

The calculation is as follows:
A score greater than -1.78 indicates a substantial likelihood of earnings manipulation.

Let's take an example we found in the stock screener: Microstrategy

This company has been selling analytics software for more than 20 years and has 2,000 employees. Recently the company decided to dramatically increase its debt level to place a significant bet on bitcoin. At present, the company holds $92,000 bitcoins, with a current market value of 3.7bn. Its market cap is 4,6bn.

After six years of declining revenue, the company seems to be making a turnaround. It reported that its Q1 revenue was up 10.3%. EBIT increased fro $-0.1 to $+10.9m. 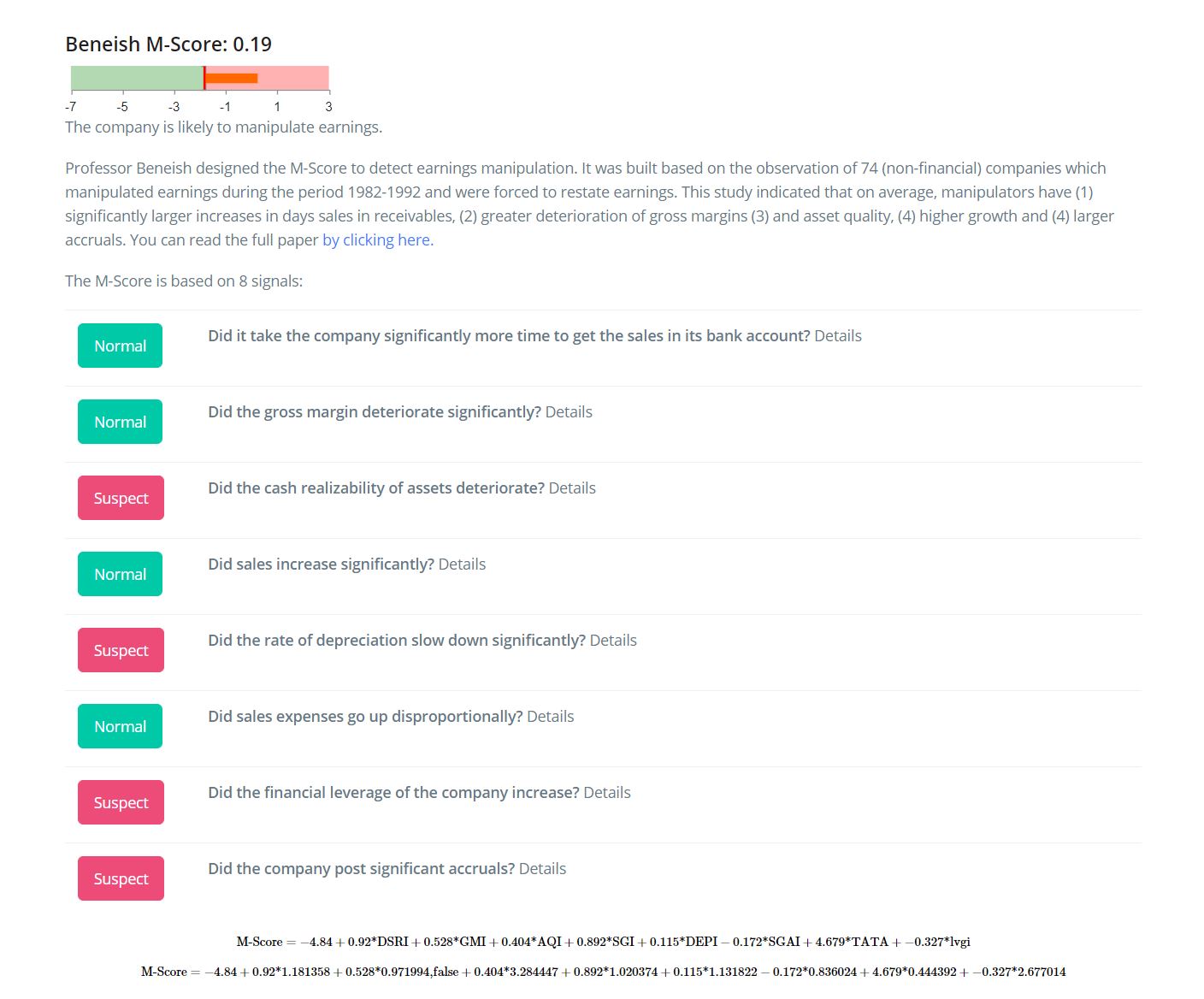 As you can see, the total score is 0.19, which is above the -1.78 threshold. According to the formula, this makes it a suspect of earnings manipulation. Other services like gurufocus give it an even worse score of 8.35, but this is incorrect and we will explain why.

We can also see that it's suspect on four signals: asset quality, depreciation rate, leverage, and accruals. Let's dive into a bit more detail.

As you can see in the screenshot below, the company significantly increased its non-current assets. This is easy to explain by the investment in bitcoins. As a result of this transaction, this ratio went up from 0.03 to 0.85. But here's where companies like gurufocus make a mistake. The ratio last year was so low that any increase would have a significant impact. And because the M-score is just the weighted sum of these eight factors, it can have an important overall impact.

To solve this issue, Beneish winsorizes percentile 1 and 99. This means that he replaces this score with the median score of percentile 2 and 98. As a result of this, we use 3.28 instead of 27.92. If we had used 27.92, the M-score would have been close to what gurufocus calculated.

The following suspect ratio is the rate of depreciation, which seems to have slowed down by 13%.

As the company financed its bitcoin purchases almost exclusively with debt, it increased its leverage significantly. So far, this bet has paid off nicely, but the bitcoin has plunged 40% since mid-April. Investors fear that regulators worldwide will crack down on these virtual assets, and Elon Musk voiced concerns about the adverse effects on the environment.

Finally, the accrual rate compared to assets was 78%. This means that a significant share of the company's income is not supported by cash flow.

This article should not be considered investment advice; in fact, Microstrategy has been very successful so far. The purpose is to show our Beneish M-scorecard and what kind of signals it provides.

Our members typically use the Beneish score to filter the results of other screens. They typically use it when scanning new markets for value stocks since they're unfamiliar with the companies. Since a share of the companies discovered manipulating earnings would eventually see their stocks plummet in value, it provides extra security to filter these potential manipulators out of the screener.

In our scorecard manual: