Our backtest universe is a subset of companies in the Datastream database containing an average of about 1500 companies in the 17 country Eurozone market during our 12-year test period (13 June 1999 to 13 June 2011). We excluded banks, insurance companies, investment funds, certain holdings companies, and REITS. We included bankrupt companies to avoid any survivorship bias, and excluded companies with an average 30-day trading volume of less than €10 000. For bankrupt companies, or companies that were taken over, returns were calculated using the last stock market price available before the company was delisted.

As you can see below, our constructed market portfolio is closely correlated with the EURO STOXX index, a broad but liquid subset of the STOXX Europe 600 Index. Over the 12-year period of the study, the market portfolio generated a return of 30.54 % or 2.25% pa, dividends included.

The test period was most certainly not a good time to be invested in stocks.

The 12-year period we tested included a stock market bubble (1999), two recessions (2001, 2008-2009) and two bear markets (2001-2003, 2007-2009). In spite of all the substantial movements, over the whole period it was essentially a sideways market, as Vitaliy Katsenelson defined in his book, ‘The Little Book of Sideways Markets’. The tables below show the movement of the market portfolio over the 12-year time period we tested: 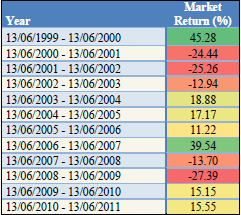